After four years of living in the same apartment, and shortly after welcoming their second child, Brittany and her husband knew that it was time to start thinking about purchasing a home. “We knew that we would not be able to stay in that space for much longer,” Brittany says. “We just had limited storage space…two bedrooms and one bath.” Her family was quickly outgrowing the space.

Brittany and her husband began their mortgage journey working with another lender, and made the switch to Stockton Mortgage after they heard about our Mortgage Credit Certificate (MCC) program.

“I knew I would have to switch lenders and so I asked my realtor if he had heard anything about [the MCC] – he had not, but I had given him a list of the lending agencies and Stockton was on it and he knew Sherri Sampson.” Brittany says that her realtor assured her that while he did not know about the MCC program, Sherri Sampson would.

“She really seemed to know her stuff,” Brittany says, referring to Sherri. “I just felt more confident with her than the original person we were dealing with.”

“She very much walked us through the process – answered all of our questions.”

Before even officially switching to Stockton, Brittany says that Sherri was able to find an issue with the current asking price that would have caused Brittany and her family to lose money when purchasing the home. “She recommended to our realtor that we change what we were asking…she suggested that before we even switched to her officially.” Brittany says that at the time, she was very impressed with the suggestion, “[I thought] wow, that’s awesome.”

“And so we switched,” she says, “…we ended up not qualifying for the [MCC] credit at the end of everything, but I’m still glad we switched lenders…”

Brittany says that once her family started their home buying journey with Sherri, it was simple. “The whole process was pretty simple – it really wasn’t complicated.” While many who have gone through the mortgage process will list extensive paperwork and documentation as a large obstacle, Brittany says that, for her and her family, finding the area of town that would best suit them was the biggest obstacle. “Paperwork wise we really didn’t have any obstacles – which was nice.”

Brittany and her family are now living in their new home; they are working on organizing their new space, and painting their walls – for the first time. “For four years we just had white walls – it was actually really depressing. Now I look around and have color…it’s more cheerful.”

“It is nice knowing that I own it and it’s not somebody else’s walls or stuff.”

She says that she feels a sense of accomplishment now, “we’ve been getting our ducks in a row for the last five years, so it was nice to get to…what we were trying to accomplish. Not that our apartment wasn’t a home for our children, but, [our home is] a better home environment for our family.”

“We enjoyed the whole process.” Brittany says that, originally, she believed that it would be more stressful. “It was just pretty seamless.” 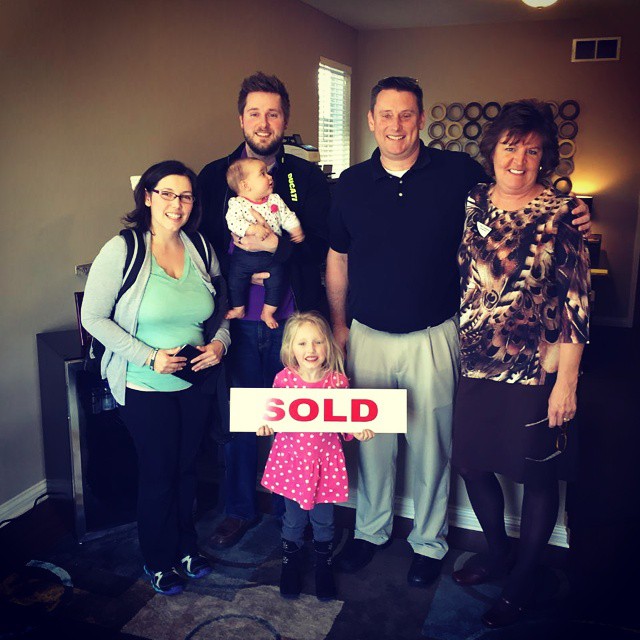 (Brittany and her family with their mortgage banker, Sherri Sampson)
Are you ready to become a First time homebuyer like Brittany? Download our First Time Homebuyer’s Guide now to learn all of the steps and gain the confidence you need to purchase your first home.

Ways to make your home green